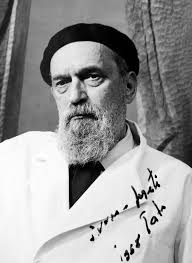 Ivan Meštrović (1883-1962) was a sculptor, painter, architect and writer, and is one of the most valued Croatian artists from the first half of the 20th century. His work, effort and immeasurable talent resulted in the fact that he is considered to be one of the greatest world sculptors of the 20th century. Recognizing a huge talent in young Meštrović, contemporary mayor of Drniš, Nikola Adžija, arranged for Meštrović to get educated at a stone-masons workshop in Split. After one year of education, Meštrović went to Vienna where he studied architecture. He lived and worked in numerous international centers, such as Paris, Cannes, Zagreb, Belgrade, Rome, Geneva and Lausanne. From 1922 he also worked as a university professor, and a year later he became the Rector of the Academy of Fine Arts in Zagreb. He exhibited his work in all major museums worldwide, both in solo and group exhibitions. Some of his best solo exhibitions include the exhibition at XI. Biennale in Venice, in the Victoria and Albert Museum in London, Paris, Prague, New York, Buffalo, Detroit, Rochester, Chicago, St. Louis, Boston and Cleveland. In 1947, at the invitation of the American Academy of Arts and Sciences, exhibition of his work was presented at the Metropolitan Museum in New York which made Meštrović the first living artist whose exhibition was organized by the Museum. In 1947 he moved to the United States where he worked as a professor at the School of Arts at Syracuse University, New York. From 1955 he taught at postgraduate studies at the University of Notre Dame, South Bend, Indiana. He passed away in Indiana, on January 16th, 1962. He was buried on January 24th in the family tomb in the Church of the Holy Redeemer, in Ružić near Otavice.

Meštrović’s art works are exhibited all over Croatia and worldwide. He dedicated and then donated a substantial part of his work to his homeland. Near Otavice he designed and had built The Holly Redeemers' Church, his family tomb, and he also designed the school building and the public care facility in Otavice. His art works can also be seen in Drniš. Drniš City Museum exhibits Meštović’s sculptures and paintings, a sculpture of Our Lady of Petrovo polje can be seen at the main altar of the Parish church of Our Lady of the Rosary. Fountain The Spring of Life, relief The Ploughmen and sculpture Mother and Child are available to visitors on Drniš public surfaces.

The Most Holy Redeemer Church / Meštrović Family Vault is also known as Mestrović’s mausoleum. It is situated on a hill above Petrovo polje near Otavice (Ružić), on a land donated to Meštrović by Drniš municipality. The basic guidelines and the concept of the building were set by Ivan Meštrović himself. The complex combines memorial, artistic, and sacral qualities. Building works lasted from 1926 to 1931 and the equipping of the construction continued until 1937. As stated in the contract of donation, concluded in 1952 between Meštrović and the People’s Republic of Croatia, The Most Holy Redeemer Church - the Meštrović family vault became a part of Ivan Meštrović’s legacy (along with buildings in Zagreb and Split). According to the definition stated in the contract, the building has several functions: it is a church, the burial place of the Meštrović family members, and a public place open to visitors. The Church and the surrounding land were declared a monument and in 1967 they were protected by the Cultural Heritage Protection Law as an immovable cultural monument. The complex is open for visitor all year round, and offers the possibility of expert guidance.

Fountain The Spring of Life, made in 1906, is set in the Drniš city park, close to the central square Poljana. This is one of Mestrović's early works (Meštrović was 23 when he made The Spring of Life), made in only ten months. The work was commissioned by Karl Wittgenstein, a Viennese industrialist and patron of Meštrović, indicating great trust in young artist. Until 1957 fountain was placed in the vestibule of Wittgenstein palace in Vienna. Although the palace was bombed during World War II, the fountain itself was not damaged. When offered at auction in 1957, Meštović bought it himself and donated it to Drniš.
More information on Ivan Mestrovic and his works is available to visitors in Drniš City Museum and in The Most Holy Redeemer Church.